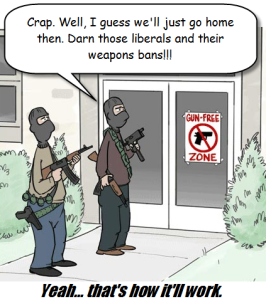 Why does anyone think that stricter gun laws will deter heinous shootings like the one that recently occurred in Oregon? People who kill other people are criminals or they are mentally deranged. Either way, they do not respond well to laws. President Obama took to the airwaves in record time to politicize the tragedy and further his agenda on gun control. Ironically, none of his proposals would have prevented the events at Umpqua Community College.

Guns are not the problem; it is the person behind the trigger. There are evil and disturbed people in our world, and if they want to harm other people, they will find a way. On April 19, 1995, a Ryder truck loaded with explosives ended the lives of 168 people in Oklahoma. On September 11, 2001, men armed with box knives perpetrated the deadliest terrorist attack on American soil. On April 15, 2013, in Boston, two pressure cooker bombs exploded killing three people and injuring over 260 others. Guns are not the only weapon out there. Perhaps we should restrict the sale of knives, fertilizer and pressure cookers.

President Obama commented in his press conference following the Oregon shooting that the states with the strictest gun laws have the fewest gun crimes. I beg to differ. Actually, the states with the highest rate of gun ownership have the lowest rate of gun murders. It makes sense to me. Nothing like the deterrent of knowing the house you are thinking of invading, or the person you are thinking of attacking, is legally armed and dangerous. Interestingly enough, Obama’s hometown, Chicago, has the strictest gun laws of any city in the nation, and they top the list for the highest incidence of gun violence. Stricter gun laws only penalize law-abiding citizens. It makes them prey for all the murderous thugs of the world.

President Obama responds to gun violence by punishing those of us who have done nothing wrong. Other people commit the crimes, and we bear the penalty. I have yet to see a report after one of these shootings where the perpetrator is described as well-adjusted, happy and content. The majority of these crimes are committed by the mentally disturbed. We have heard of their struggles with mental illness from their family members, neighbors, co-workers, and from their postings on social media. Prior to the 1960’s and Deinstitutionalisation, many of these people would have been in mental hospitals. Involuntary commitment is now a difficult process, and so we have more individuals who are essentially ticking time bombs walking the streets. In fact, many of our homeless, and many in the prison system are suffering from mental illness. This is a difficult problem with no easy solution. The Democrats want us to believe that they are just seeking reasonable safeguards, but they are not to be trusted. Their end game is to make it impossible to legally purchase a firearm. Once they start passing legislation that impedes our second amendment rights, they will not stop until they have rendered us defenseless. Think Nazi Germany.