A year or so ago, while visiting Southern Methodist University in Dallas, I had the opportunity to tour the George W. Bush Presidential Library located on their campus. One of the exhibit areas is a theatre where they play a montage of scenes from September 11, 2001, and the days immediately following. That day is etched in my mind, as I’m sure it is for most other Americans, but my memory of what President Bush said and did during that time was a little foggy. As I watched the videos, including the scene where the President first hears of the attacks from Andy Card, his address to the nation late that evening, and his words of comfort to those mourning at the National Cathedral three days later, I found myself getting teary eyed.

As I sat there, it dawned on me that my feelings were not the result of the circumstances, as horrific as they were; it was because I had forgotten what it’s like to have a President who shows emotion. I had forgotten what it’s like to listen to a President speak, and feel proud of my country. I had forgotten what it’s like to feel safe, knowing that our president is going to protect the country. President Bush, though visibly shaken, managed to address the American people, and reassure us that he was in charge, and that an attack on our country would not go unanswered. I had chills as I looked at the video of him at ground zero, standing among the first responders, his arm around one of them, talking through a bullhorn to them, to us, and to our attackers, and letting us all know that this carnage would not stand, while in the background they chanted, USA! USA! USA! 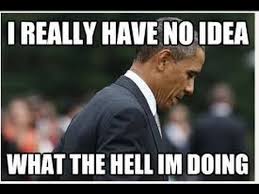 For the last seven years, we have had a president who from his first apology tour in Europe, where he told the people of France that we are “arrogant and derisive”, has been confessing what he perceives to be America’s sins. He said we made “hasty decisions” and were “off course” in the War on Terror, and that we need to work through the “darker periods in our history”, and my personal favorite, how his election will see a “restoration of America’s standing in the world”.

President Obama has made the focus of his administration to demean and degrade our country. I think we have become so used to hearing what a horrible country we are, how we torture prisoners, purposefully target young black males, disrespect Muslims, and cling to our guns and religion, that we don’t even notice it anymore. What president in our history has derided our country like this? What president, especially when he is on foreign soil, disparages his country and his fellow citizens?

Sunday evening, President Obama spoke from the Oval Office to “reassure” Americans about his plans to fight ISIS and to abate the ongoing threat of terrorism. It was an exercise in futility, because he has no plan. Rather, he used the opportunity to call on Congress for stricter laws on gun control, as if that would have prevented the attack in San Bernardino, or any of the past attacks for that matter. More pointedly, he cautioned us against anti-Muslim rhetoric, and assured us that this violence has nothing to do with Islam. Apparently, the larger concern for him is that we esteem Islam and Muslims, and right off terrorists as random individuals who have just gone down the wrong path. I am not implying that all Muslims are murderers, but we cannot deny there is a radical form of Islam whose goal is to perpetrate the violence against the “infidels” they believe their faith and the Quran necessitate. What I do not understand is why the president is so solicitous of Muslims over Christians, and why he is so consistently derisive of our country.

His esteemed attorney general, Loretta Lynch, went so far as to threaten legal action against anyone who engages in anti-Muslim rhetoric. The last time I checked, this was a free country, where we have freedom of speech, and freedom of religion. As I listened to his address that night, it occurred to me that for the last seven years, he has fed us a steady diet of “propaganda”, one of the oldest tools of the enemy. Hitler used it, Mussolini used it, Stalin used it, Ho Chi Minh used it, and they all found it to be very effective. When you condition people with the same twisted information long enough, they begin to believe it. These men were able to convince their populace that their depraved actions were righteous and for the good of their country. Of course, we all know that they were insane, but most of those who lived under their totalitarianism could not see it, or had no choice but to endure it.

We do have a choice in this country. We call it “impeachment”, and I think it is long past due. Barack Hussein Obama has weakened our country militarily, and diminished our standing among our allies. He has put us in harms way with his incompetent leadership. He cannot see that we are in a “war on terror” whether he is willing to use the term or not, and whether he is willing to step up and fight or not. He has referred to attacks in our country that were obviously driven by jihad, as “workplace violence”, and attributed the attack on our embassy in Benghazi to an anti-Muslim video. The night before the attacks in Paris, he said we were “containing ISIS”. After the attack, he called it a “setback”.

He has used every episode of violence to further his anti-gun agenda, and to vilify Republicans because we are not inane enough to realize that every incremental move on the part of Democrats towards stricter gun laws is a step closer to surrendering our only form of defense. We certainly cannot count on our so-called Commander in Chief to keep us safe.

During the bulk of President Obama’s occupancy of the White House, we have been relatively inconsequential militarily. Obama routinely ignores the advice of the joint chiefs, whose purpose it is to advise the president on military matters. He refuses to acknowledge the danger that ISIS poses to our country, and will not commit to their defeat. He speaks of a coalition that is nonexistent, and the airstrikes he has ordered against ISIS, have been ineffective. The bulk of their financing is from oil, and he refused to bomb their oil fields or tankers, because he was concerned about the effect it would have on the environment.

I am not a military strategist, but I do know that 70 years ago we won a decisive victory half way around the world, against formidable opponents like Germany and Japan. I feel certain that their level of intelligence, strategic knowledge, and military preparedness far exceeded that of a group of thugs who live in tents in the desert. A year ago, President Obama dismissed them as the “JV team”, and his procrastination has allowed ISIS to expand their territory and their numbers, but even at their current size and military capacity, I have a hard time believing that the most sophisticated super power on the planet cannot level them.

In August 1945, President Truman made the most difficult decision of his life when he decided to drop the atomic bomb on Hiroshima and Nagasaki, but he did it to end a war that had cost millions of lives, and would cost an estimated 500,000 more if we had to take the next step and invade Japan. As Richard Nixon said of Truman years later, “He was a tough son of a bitch; he had some of the best gut instincts I have ever seen in a president, he trusted them and he was usually dead-on.” Well, I wish Obama had even half of Truman’s guts.

I firmly believe that President Obama has no desire to defeat ISIS. I cannot imagine why, but he is either completely inept, or he has another agenda. Either way, he is not looking out for the best interests of this country, and that makes him a treasonous president. He is completely out of touch with the fear that American’s are feeling, and he cannot begin to fathom a strategy to defeat ISIS. An enemy in relative infancy outmatches the leader of the most powerful country in the world, with access to the latest technology and most sophisticated military capability.

That puts me in mind of something my very wise, but not always subtle Mother used to say to me when I would call her and complain about one of my toddlers who had me at my wits end, “Well hon, if you’re bamboozled by a two-year-old, you might as well turn your toes up”.

I think that applies here.